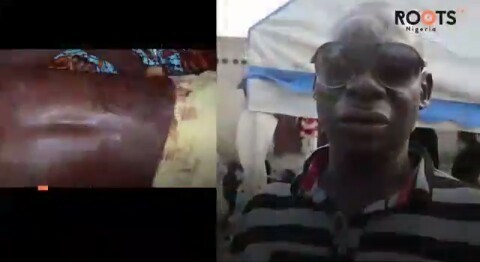 How a 7 Year-Old Girl Died as Police and Soldiers Clash . . Facts have emerged on how a 7-year-old girl, identified as Janada Yamta was hit by a stray bullet during a clash between a group of police officers and some soldiers in Maiduguri last week. . . The clash, which was reported to had been triggered by the disagreement over the sharing of food items for the Internally Displaced Persons, saw the security personnel deployed to maintain orderliness get into a conflict with the army officers. In the ensuing gun battle Janada, who was asleep at the time, was “hit by a stray bullet during the clash”. . . Speaking with Rootstv Nigeria, the father of late Janada said “she was already asleep when we heard her scream and then she started bleeding. She was rushed to the hospital and it was discovered that she was hit by a bullet. . . “When we got home, we saw the hole through which the bullet penetrated the roof. A Rootstv investigation also revealed that apart from Yamta, a police sergeant, identified as Usman also died while two others sustained injuries. . . Another eyewitness recounted the clash. "There was an argument between the soldiers and the policemen. The military personnel who were in Mufti (civilian clothes) got manhandled by the policemen even after identifying themselves as military men. This ignited the anger of the soldiers who went back (to their barracks), reinforced and came back. They started shooting sporadically, killing a police sergeant and injuring two others. . . “In the process of fleeing, the soldiers, five in number started shooting into the sky while moving along the near the House of Assembly quarters road where they eventually escaped. . . “The late girl lived with her parents at Chezcoan area, very close to the House of Assembly quarters where the soldiers made their escape,” the source said. . . Roots TV has contacted the authorities for a comment, but no comment was forthcoming as we went to press. . . #ROOTSTV #ROOTSTVNIGERIA #Nigeria ‪#Death ‬#soldier #army